So, SL build UI redesign is still no go… because I spent the whole week-end working on something.
SL建造界面重新设计还是没有进度……因为整个周末都花去做这个了。 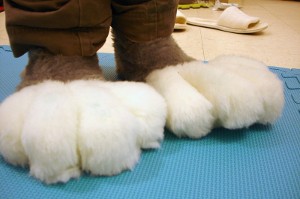 These are feetpaws built on a sock base and fit to myself, so they are very comfy! Takes about three or four hours per paw, which comes to a total of eight hours… not counting the time shaping foam or purchasing tools and materials. This is the first time I worked with glue gun and faux fur, so there are lumps and visible seams all over (but only hardly). The fur only goes as high as the ankle; it’s a limit of the short duct-tape dummy I made. In addition, the stuffing (Subway sandwich wrappers and old Shanghai Daily pages) compress over time, so it ended up being a bit crampy. I also need to remember not to use markers on any foam surfaces that will be covered with white fur – green foam shows through, green markers doubly so. There is no pawpads or soles on this thing, since it gets really tiring after working on this for 4 hours… so currently it can only be worn indoors.

For the fur, I settled cutting the backing with a segmented utility knife… by X-Acto. Most people recommend the brand for their pen blade, so I didn’t expect them to make these things… and while the tip is a bit blunt, the blade is very sharp!

The glue gun used is a dual-temp from Ad-Tech – like all Ad-Tech hot glue guns, it has a little slip of warning inside the package that says the power cord contains lead (to prevent overheating), and one should wash hands after handling. A pity, considering hot glue itself is non-toxic and is probably the safest glue usable for working on costumes you can get your paws on in North America. Lead is… nasty. It can cause nerve and brain damage, and accumulates in the body with a half-life of 10 years by replacing the calcium in bones. Many of lead’s damaging properties are because of its similar chemical behaviour to calcium. Lead enters human body mainly through ingestion and inhalation, and also through skin contact, although for pure lead, this is minimal. There has not been found an amount of lead that is too small to cause no effect.
热熔胶枪是 Ad-Tech 牌子的双温枪。和Ad-Tech的其它枪一样，在包装的里面有一个很小的注意事项写着电源线包含铅，用后清洗手。好可惜。因为热熔胶本身并无毒，算是北美能搞到的能用在兽装上的最安全的粘合剂了。铅很烦人。它可以造成神经和大脑伤害，并且在体内堆积，半衰期有10年之久，主要代替钙囤积在骨头里。铅的许多伤害特性都和它与钙类似的化学性质有关。铅主要通过呼吸道和消化道进入人体，也可以从皮肤，但是这对于纯铅来说，量不是很大。目前还没有发现足够小到不足以造成影响的铅含量.

In developed countries, lead-contaminated plumbing is a major source of lead. … maybe I should get my tap water tested.

So for the UI project I chose to redesign the building interface of Second Life a month ago, without giving too much thought about it. And of course, didn’t manage to do the first part of the project on time, or even at all. Now the deadline of the second part is coming close…

I think I might just have made a bad commitment.
Trying to do the impossible. Worse, I chose to do it alone. Frig. Now I only have two days…

To top things off mom thinks I’m planning to go to Anthrocon and is thinking of tagging along! I deferred the problem of scheduling until Monday but didn’t really give it a thought either!

On top of that I am just so used to browsing stuff and doing nothing I just don’t want to do any real work at all. I get very easily addicted to reading random stuff… easily spends 10+ hours browsing every day.

I shut myself in this white box, in front of the blue box… not even virtually socializing. Let’s not even talk about the real life.

and I can’t even keep my mind on writing blog either. It’s just like that…

Bleh, I don’t even know what to say here (this paragraph revised two times). Just that I suck. In short: I haven’t succeeded in my own effort, so I’m afraid and would prefer to stick to familiar stuff, like reading addictive websites and never studying. I’ve been doing this for 10 years, it’s damned familiar to me. Nothing I have is of my own effort. Either it’s from my parents or I did it effortlessly.

But living alone, having no one to guide me…

I want a roommate.